With 13 countries marking the 13th Danube Day, the events provided a superb celebration of the many ways the region's rivers enrich our lives. An estimated 25,000 people got active on Danube Day: clearing riversides marred by rubbish; competing in sport, art, environmental and culinary challenges and contributing to sustainable development. Gifts of international friendship were exchanged and beautiful cultural traditions shared. Close to 400 organisations held events, forging a strong message of Danube solidarity, diversity and cooperation. 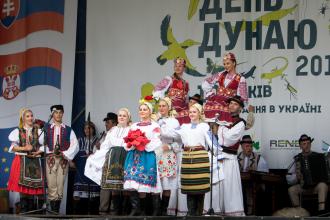 Partner organisations organised over 150 events, with some countries extending Danube Day across the summer. Month-long celebrations took place across southern Romania and in Croatia. Bulgaria held two weeks of festivities with activities in all the Danube municipalities; and Serbia organised actions in 13 towns and cities. Danube Day was marked in six capitals: Wien, Bratislava, Budapest, Ljubljana, Zagreb and Belgrade.

Many events inspired and empowered young people. A thousand children took part in Vienna's eco- activity day; Ukrainian and Hungarian children exchanged painted fish across the Tisza at a cross-border festival; and in Slovenia, the ministry youth competition saw 10,000 people clear rubbish from 150 km of shoreline. Children came away from events knowing more about the region's rivers; it's shared and diverse cultures and the international movement to sustain them. The take-home message was that together we're stronger and as individuals we can and must contribute to a sustainable future.

Meetings at all levels engaged government, management, business, academia and civil society in pursuing such a future. Discussions on Europe-wide and cross-border cooperation over water resources and infrastructure took place, along with round-tables on restoration projects; new protected areas and the latest developments in flood protection and public alert technologies.

The ICPDR would like to thank all the organisations involved in Danube Day 2016.

Download the full list of 2016 Danube Day Partners. Read on to find out more about the national and international highlights.

On the Ukraine - Hungary border, a unique day of solidarity and celebration brought together Galabor in Zakarpatska Oblast with its Hungarian neighbour, Tiszakóród. The communities, separated by the Tisza, were united for a joint Danube Day. For the first time in the towns' histories, residents freely crossed a temporary border-check located mid-stream. Ministerial and local authority representatives met on a barge at the mid-point to discuss bi-lateral cooperation over water resources. A thousand residents enjoyed a music festival, environmental art, games and quizzes. The 'Tisza Fish of Desire' were a particular highpoint. Painted by children from both countries, the colourful plaster fish were exchanged across the river and made into permanent displays: enduring symbols of cross-border friendship. Other activities saw Kvasovo children win a dingy for their community and Galabor receive recycling containers from Coca-Cola Beverages Ukraine. Read more on Ukraine's Facebook page.

Moldova's Danube Day began in Cahul with a meeting of national and local authorities, institutions and NGOs. Vasile Bîtca, Minister for Regional Development, and EU Ambassador Pirka Tapiola announced progress on the EU Danube Strategy; water resource and infrastructure initiatives and a proposal for a three-country Lower Prut Biosphere Reserve. The now traditional celebration of Danube folk music, dance, costume and craft took place in Djurdjulesti, enjoyed by 300 local residents. Danube solidarity also spread to young people across the country with the showcasing of the Danube Art Master contest and environmental films at summer camps throughout Moldova.

Romania held one of the biggest celebrations with 4000 people participating. The day was extended into a 'Danube Month' with festivities in each of the 11 Danube Water Basin Administrations. Giurgiu hosted national festivities with 350 people joining the Minister of Environment, Waters and Forests for a day of Danube discussion and inspiration. Minister Cristiana Pasca Palmer, State Secretary Negru and Apele Române's General Director attended the Arges Vedea Basin Committee Meeting and viewed the latest in flood protection. 150 children enjoyed experiments, water testing workshops, games, art and recycling actions in a packed programme that nurtured curiosity and environmental commitment. Across southern Romania, festivals, clean-up actions, workshops, field trips and a plethora of art, sport and musical entertainment took place.

Bulgaria held two weeks of celebration from Vidin to Silistra,  with thousands enjoying festivities across all the Danube municipalities. Events celebrated Danube life: culinary festivities, art contests and music in Belene, Ruse and Tutrakan; rubbish clearing in Lom and Kozloduy; a food festival and water testing in Baykal; exhibitions in Vidin and cultural activities in Silistra. It was all-aboard for many, including guided river trips on the Radetzky steamship in Kozloduy and a colourful regatta in Ruse. Experts spoke about rivers, their wildlife and the unique cooperation protecting them. Many actions focussed on engaging children: Svishtov pupils visited a waste water treatment plant; Nikopol children covered pavements with rainbow-coloured fish; balloons were released in Belene and Tutrakan; and Pleven scouts covered the Danube River Basin Directorate HQ with river art.

Serbia celebrated at 17 different venues across 13 towns and cities! In Belgrade, eco workshops and outdoor classroom days enhanced children's sense of Danube identity, encouraging them to look after their rivers into the future. Belgrade’s Great War Island was the scene for the 9th 'Save the Danube Eco Camp' where older students from across the country took part in a week-long outdoor adventure: camping under the stars and learning about environmental issues from national experts. Other events took place across northern and central Serbia. Whether through river outings, environmental actions, artistic ventures, sport or fun competitions, Danube solidarity was celebrated in Stara Palanka, Donji Milanovac, Novi Sad, Veliko Gradiste, Kladovo, Pancevo, Golubac, Smederevo, Cuprija, Negotin, Odzaci and Backa Palanka!

In Bosnia-Herzegovina, the gruelling 870km Sava 2016 Cycling Tour passed through northern towns, spreading messages of Sava and Danube solidarity. At least one cyclist from each Sava country completed the mammoth challenge to cycle along the river from source to mouth in 9 days. Days 5-7 saw local Bosnia-Herzegovinian cyclists join the tour as it passed through Gradiška, Bardača, Brod, Odžak, Šamac and Brčk. The event was organised by cycling, tourism and environmental clubs in each country in cooperation with the International Sava River Basin Commission. Read more about the trip in the international highlights (available soon).

In Croatia, the banks of the Drava in Osijek provided the backdrop for Danube Day. Ministries, institutions, local and regional government, enterprise and interested parties marked the day by promoting sustainable river management. Choirs and folk groups entertained the public with traditional songs and dance. Children discovered what could be found in a single water droplet at a mobile laboratory and learned why rivers are so vital. A state educational campaign also brought hands-on water science road-shows to schools and public events across the country. Events complemented a 'Month of Rivers' campaign in Županja, Zagreb, Slavonski Brod and Sisak. Running from Sava Day on the 1st June to Danube Day on the 29th, the events included summer fairs, featuring the best of old traditions and new ideas - from traditional crafts and cuisine to modern technology and sport.

In Hungary, around 2000 people took part in festivities in five towns and cities. As well as the cross-border event in Tiszakóród (see above), several  actions took place in the capital. City residents were inspired with fun experiments, crafts, quizzes and music at a free family day on Budapest's Children's Island. A Danube Passport game got children investigating river wildlife: handling reptiles, counting fish and crafting models to win Danube goodies. Families released 300 sterlets into the Danube and watched fire-boat demonstrations from the shore. Government, institute and NGO representatives attended the Interior Ministry's Danube Day conference, followed by a boat trip to view a shipping waste recycling facility and a restocking project reintroducing 6 tonnes of native fish. Elsewhere, activities in and beside the river featured at events in Dunaszeg, Gönyű and Lábatlan.

Slovakia's grand celebration took place in Bratislava where 700 people enjoyed a day of Danube fun. Opened by the Minister of the Environment, László Sólymos, events took place at the Ministry and on the Danube. There was something for everyone: free boat trips; live rescue demonstrations; traditional and modern music and dance and the chance to explore the river's hidden world through microscopes. Young visitors were enthralled with the mini Danube zoo; puppet theatre; story-telling by a water sprite; face-painting and awesome magic and bubble shows! Water and environmental organisations showcased their work and demonstrated how we can all act to help our rivers.

In Austria, the Danube came to the heart of the city and secured its place in the hearts of a thousand Viennese children. The courtyard of the Museumsquartier was filled with interactive games, fascinating facts, climbing, crafts and competitions. Zooming around the stalls, the children solved puzzles and collected stamps to become champions in the Danube Puzzle Race. En-route, experts brought the river to life: with hands-on interactions - from snakes to micro-organisms; interesting facts about the countries; and first-hand advice on river careers and conservation. Children worked together to build a mobile flood defence barrier, watched outdoor theatre shows and made their own music with water! Danube ambassador, actress Lilian Klebow, opened the event with Federal Ministers, Andrä Rupprechter and Jörg Leichtfried, and Vienna Environment Councillor, Ulli Sima. Watch Austria's Danube Day video!

In the Czech Republic, Moravia marked Danube Day with a 'Morning of Water' at the Mostík Family Centre in Mosty u Jablunkova. Encouraging the future guardians of the Danube to explore water and rivers through play, toddlers and infants got active with fishing games, watery painting and craft. Children had the chance to sample salt water for the very first time at their own water bar! Parents were spared the water tasting sessions, opting for coffee instead.

In Germany, festivities in five towns emphasized Danube solidarity, diversity, restoration and flood protection. Bavaria marked 10 years of the Neuburg Auen Institute: 250 people enjoyed music and a tour of the floodplain forest. In Neuburg and Ingolstadt, 300 visitors cheered on teams competing for Danube Day medals in the Gaudi triathlon. Along with the river swim, theatre and spectacular bank-side fire show and concert, it made for a great day. At the Ehingen-Berg water-gauge in Baden-Württemberg, residents heard about new ways to forecast and minimise floods impacts, with demonstrations of water volume measuring and an app to alert residents to flood events. Ulm's celebration was a riot of colour: 650 hand-painted flags were paraded along the riverbank at the International Danube Festival's opening ceremony. Designed by Serbian artist, Dragan Matic, they provide a stunning symbol of the Basin's historical, political and cultural diversity.