Danube Day generated an immense response to this year's rallying cry to "Get active for a cleaner river". 550 partner organisations produced the biggest Danube Day since 2013. This achievement and the cleaner rivers motto were inspired by the 2016 Danube Declaration. This tasks the 14 Danube countries and the EU with making the region cleaner, healthier and safer. 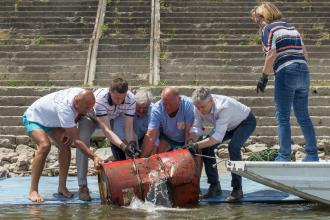 Around 33,000 people got involved in 230 events in 13 countries. These were organised by an established and unique cooperation of government, NGO, science and business sectors. In a highly effective social media campaign run by the EC Directorate-General for Environment, messages were seen by 260,000 people, producing 2,400 likes and reactions on Facebook. This was accompanied by tweets from the Commissioner for Environment, Maritime Affairs and Fisheries, Karmenu Vella, and by EU Regio Interreg.

Following a relaunch in 2017 by organisers, GWP CEE and the ICPDR, students from Bosnia-Herzegovina scooped the 2017 International Danube Art Master prize. Taking place in 12 countries, around 2000 pupils from 200 schools conveyed messages of environmental concern, hope and solidarity through artworks. The new video sub-category was popular, comprising 20% of entries.

With cleaner, healthier rivers at the heart of the event, many actions resulted in immediate enhancement of the Danube environment. In Slovakia, 36 districts undertook bank clean-ups; in Slovenia, 15,000 people cleared 8 tonnes of litter in the 'Moja reka' contest. High-level Croatian officials rolled up sleeves to assist divers in clearing rubbish above and below the waterline in Vukovar. While in Ukraine, the 'Plastic Treasures' competition saw 700kg of dumped plastic cleared and recycled.

The ICPDR would like to thank everyone involved in Danube Day 2017.

In Ukraine, a joint festival with Romania in Tyachiv emphasized basin-wide solidarity, celebration and sustainability! By providing a platform for informal discussions, it nurtured cross-border relations between ministries, agencies, communities and children. Innovative actions - the 'River Quest' challenge; 'Water Oscars' video awards; 'Plastic Treasures' rubbish clearance competition; and the unveiling of a beautiful mural of Tisza life - made sure that Danube awareness continues into the future. To find out more, watch the video of Ukraine's Danube Day and check out their Facebook page. Adding to this was the Danube Art Master contest: 35 schools entered this year's competition covering both the Tisza catchment and the Danube Delta. Also marking Danube Day in the Delta, WWF celebrated the sturgeon with a day-long festival in Vylkove.

In Moldova, activities recalled past traditions and helped forge sustainable futures. Around 1000 people attended the events, which were publicised across the country on the national news. In Djurdjulesti, Moldovan and Romanian counterparts met to facilitate cross-border cooperation. Regional customs were celebrated at folk festivals in the town centre and at its port where people also toured the facilities. Danube Day messages were spread through summer camps and lectures for Chisinau University students.

In Bulgaria, 2000 visitors enjoyed the special events in all 7 Danube provinces. Culinary delights featured at Vidin's floating feast, Kozloduy's fish festival and at the annual BBQ at Baykal's wreath ceremony and festival. Danube banks were cleared across the region including actions in Lom and Nikopol. In Ruse, Romanian experts joined Bulgarian counterparts for a scientific conference. WWF's environmental education activities inspired young sturgeon envoys at Belene's 'Danube Days' festival. Across the region, sport, music, art and the Danube rivers brought people together.

In Serbia, 20 actions in 12 towns inspired young people to take action. In Prahovo, WWF Serbia's role-play and eco games helped cultivate young sturgeon ambassadors living within fishing communities. At Zemun Quay, the Republic Directorate for Water held its annual family festival. The 'Great Belgrade Regatta' brought four days of fun on and besides the Danube in an international event that attracted people from 10 countries. In addition, students enjoying the 10th 'Save the Danube' eco camp gained valuable water management experience from national experts.

In Bosnia-Herzegovina, Ilidža students were crowned national Danube Art Masters for 'Bridge', their ingenious construction of plastic bottles and plaited bags. Traversing a Bosna tributary, the artwork emphasized both the river's role in linking people but also the pollution pressure it faces.

In Slovenia, thousands of people were mobilised into action. Communicating concern for the Sava and Drava rivers, young Art Masters from Zagorje, Voličina and Maribor were awarded alongside corporate and public sector winners of a 3-country Bled Water Festival stewardship contest. 15,000 people cleared 8 tonnes of rubbish in the 8th 'Moja reka' contest and 1000 pupils took on micro-plastic pollution in the 20th 'Water Detective' contest.

In Hungary, 2000 people got active at events in Barcs, Budapest and Győr. The Drava river set the stage for a joint Hungary-Croatia day: neighbouring communities shared traditions, boat trips and fish soup; while international, state, local and civil society officials discussed flood and sustainable river management. Flood education was the focus at an EUSDR workshop in Budapest and water-themed family fun on Children's Island and in the Győr Festival attracted many visitors.

Slovakia's events saw around 4,500 people celebrate their rivers in Gabčíkovo, Bratislava and Komárno. An exhilarating day at Gabčíkovo included dramatic river rescue displays, riding, climbing, and for many their first trip through the dam. Being engulfed in foam and bouncing on inflatables was a big hit, as were music and dance performances on the big stage. Cruises in Komárno and Bratislava brought 1400 residents closer to their river: views of the capital's night-scape from the water were stunning. 36 districts also undertook bank clean-up actions.

Austria embraced its rivers, with 40 organisations contributing to Danube Day. A young Slovak delegation joined 1000 children in solving action-packed eco challenges in the Vienna Stadtpark Puzzle Race. Actress Julia Cencig donned special wellies and partnered Minister Andrä Rupprechter for a group waltz. Children tried out being Environmental Officers; met European March Turtles; mixed their own water cocktails and built floodwater protection walls. Plus across Austria, 900 pupils got creative in the Danube Art Master contest. Get a flavour of the day from Danube Day Austria's video and on Facebook.

In the Czech Republic, the village of Mosty u Jablunkova's in Moravia-Silesia held an end of term 'Children's Challenge' with support from the Environment Ministry. Toddlers to teens joined in a series of river-themed puzzles, art and eco activities to win the latest ICPDR Danube goodies.

In Germany, creativity and environmental awareness were celebrated at the Danube Art Master awards at Schloss Grünau. Among the prize winners was teenager Jakob Bauch, who impressed ministry judges with his ingenious animation on pollution, and received a workshop with a professional film company as his prize. In Baden-Württemberg, the public joined ministry officials for a tour of Sigmaringen Sewage Works, a model of how effective treatment protects wildlife. Whilst in Neu Ulm, youngsters were delighted by a Donaubüro nature story-telling art workshop led by local author Claudia König.